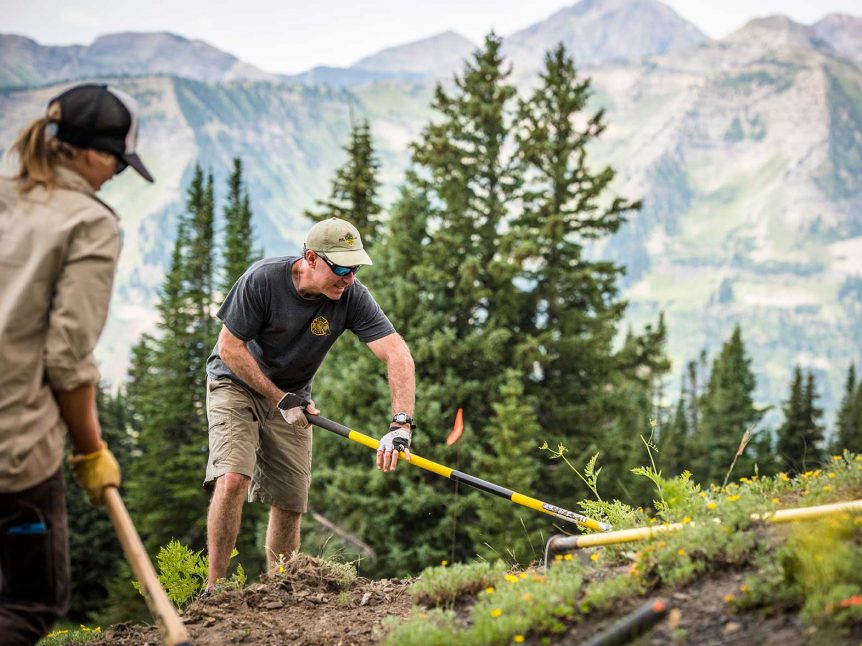 The Crested Butte Mountain Bike Association (CBMBA) is putting out the call for their annual work weekend, presented by Pinnacle Orthopedics, Saturday and Sunday, July 28-29. Hikers, bikers and anyone else with a pulse it seems has been making the trip high into the Washington Gulch drainage past the Elkton townsite to access trail 403. As a result, the uptick in activity has people traipsing all over the place across meadows and onto mining sites, often walking, with or without knowledge, across Jed Frame’s land. Jed was born on the land and still lives there and the impact has risen exponentially over the past several summers. In an effort to mitigate that pressure and create a way to keep 403 trail open to the public, CBMBA has dedicated their annual trail work weekend this year to moving the start of the 403 trail completely onto public land. “The main thing is putting it on public land to ensure public access in perpetuity to 403,” explains CBMBA director Dave Ochs. “Good on Jed, he’s super cool and he wants people to have access. He doesn’t want to stop people from enjoying public lands.” Ochs tells of one instance in particular when Jed put a picnic table on his property to enjoy the views and someone ended up using it as firewood. “Stuff has been taken off of his land, old mining equipment has been spray painted and parking has become a major issue,” says Ochs. “It’s an incredibly heavily used trail and not just for biking but a lot of hiking too and it’s being disrespected. Last summer was a tipping point for sure and so we put it on the top of our list.” As it is right now, the parking area commonly used is partly on Jed’s land and partly on public land. In addition, the first eight-tenths of a mile of the actual trail is either on, or traverses across, Jed’s land. The plan is to replace .88 miles of current trail on private land with 1.1 miles of trail entirely on public land. The new trail will start two-tenths of a mile past the current start of the trail toward Paradise Divide. According to Ochs, it’s going to be a monumental affair as the 1.1 miles of necessary trail building will be a tough row to hoe. “It’s going to be some gnarly building,” says Ochs. “It’s a lot of work and we need two days. It’s still going to maintain the 403 flavor with a mix of steep, exposed sections as well as low-grade track. One of the best parts is the new way has amazing views of Paradise Divide before you pop over to the other side with more amazing views another direction.” Past trail work weekends have drawn anywhere from 40 to 100 volunteers. CBMBA is hoping to get numbers closer to 100 out there each of the two days to get the new section of trail built. “If we get at least 80 people out there for two days we could get it done,” says Ochs. Thanks to the sponsor, Pinnacle Orthopedics, Rim Tours will be on hand to feed the volunteers, providing dinner Saturday night and breakfast and lunch Sunday, with Upslope Brewing providing beverages. One of the many highlights of the weekend is the camping spot, as people will be permitted to camp Saturday night in an area not typically open, on the overlook just above Elkton. “We have a unique opportunity to camp at an amazing spot,” says Ochs. In addition, there will be copious amounts of raffle prizes available in the raffle Saturday night, including a pair of skis from ROMP. “Mad prizes, bring the fam, bring the washboard and the spoons, or whatever instrument you play,” says Ochs. “Nearly everybody will walk with something.” Trail work is slated to start Saturday morning at 10 a.m. and continue all day, so get there when you can. Crews will then head back out Sunday and people are encouraged to come for at least some of it, if not all of it. CBMBA will provide gear shuttle for all volunteers so you don’t need to carry camping gear, change of clothes or anything else you may need out there with you. They do ask that you either ride or carpool out to the spot, as parking is limited. It’s important that volunteers RSVP to let CBMBA know you’re coming. Just email info@cbmba.org and that way they can make sure there’s enough food and beverages for everyone. “This will be major trail building,” says Ochs. “This is going to be some of the hardest building we’ve done. We need peeps.”